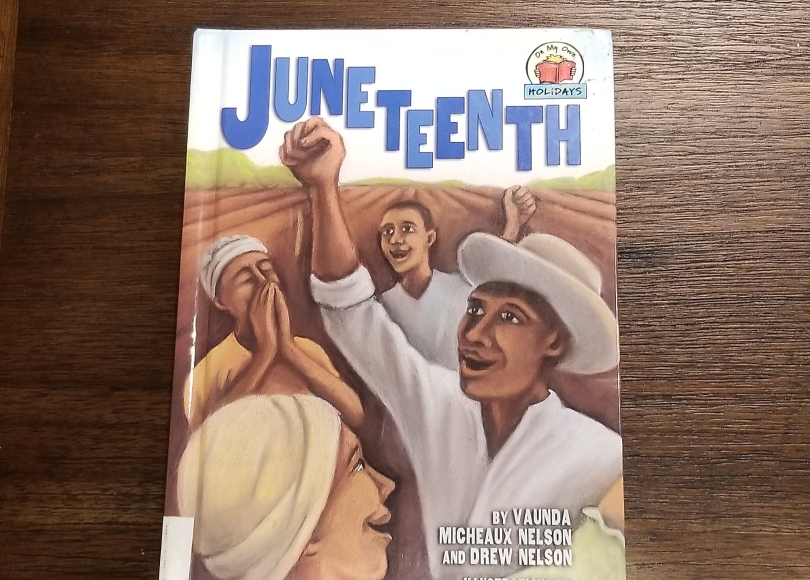 I read this book about slavery and the end of slavery called Juneteenth, by Vaunda Micheaux Nelson and Drew Nelson.

It was a very good book about a holiday called Juneteenth, which is celebrated on June 19 by black people in the United States. At first, I never knew what this holiday was. But this book really helped me understand.

It talked about how the slaves in Texas in 1865 were the last to learn that the Civil War had been over for two months. And that President Abraham Lincoln had signed the Emancipation Proclamation two years before, but the masters never told the slaves because they wanted one more harvest of free labor.

This book was interesting and it really drew my attention at the beginning. It was kind of like a fish hook and it was reeling me into an exciting story.  I really wanted to read the book because of this.

So one day, every slave is having a regular working day in Texas when thousands of people begin to dance with joy and strike people with good news.  That was June 19, 1865. When people heard the news, they started crying, praying and doing anything you might imagine in happiness. Why are they so happy? Because they just heard they are free! Free from slavery, chains, auction blocks … they can feel like actual humans now!

I liked this book because it doesn’t just talk about the people being happy for freedom. It talks about what slavery is, the Civil War, and a lot more. I think this was terrible. I feel so bad for the people who lived in that time.They weren’t treated like humans, even though they were. If I was alive in that time, I would be really scared everyday and I hope I would stop slavery (but if I was actually living in that time, I probably would get whipped or even killed for trying to stop it).

I also liked this book because it was so interesting to learn about this holiday I’ve never heard of. I recommend this book to kids who want to learn about slavery and what it is. Also, this could be a perfect book to read in a school or another learning center since this book is non-fiction. There is a glossary at the end of the book that can help kids understand words in the book that they might not know.