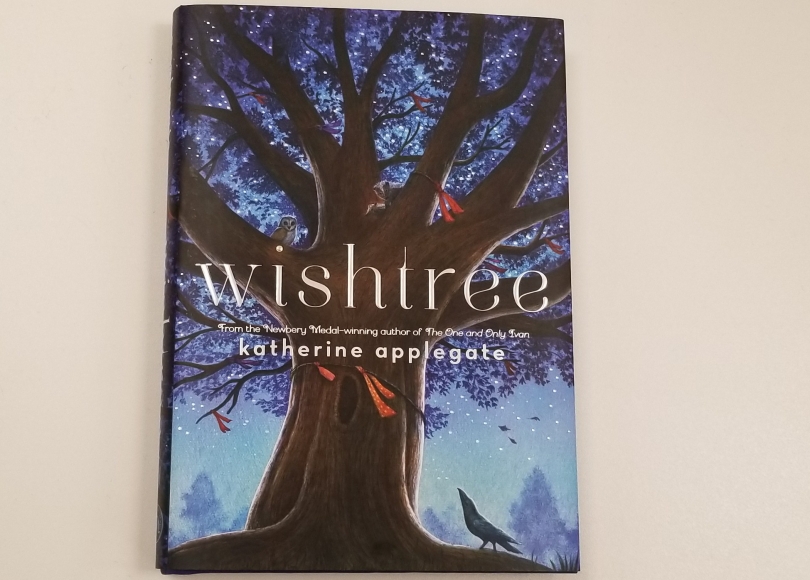 Wishtree, by Katherine Applegate, is told from the perspective of a tree.

Mrs. E., our school librarian, recommended it and said this book represents biodiversity because it is about living things like plants and animals and it also has a Muslim character.

The main character is a really old oak tree. The tree’s friends are animals, and they call it Red. It is 216 years old and has lots of stories to tell. But … it can’t tell them, because of one rule it has to live by: Trees cannot talk to people, they can only talk to animals.

Red is a “wishtree.” People every year put their wishes on Red. They put them on socks, rags, and even underwear. They wish for things like chocolate spaghetti, or sometimes meaningful things, like for friends not to move away. Some people just want Red to be a regular tree. They think it’s crazy that people think a tree can grant wishes and they don’t like when he is covered with socks and other stuff.  Even though people believe, Red doesn’t believe in his ability to make a wish come true.

My favorite kind of books have some kind of conflict in them. There are two main conflicts in this book. One of the conflicts is that a girl named Samar is the only Muslim kid in the neighborhood, and she is usually followed home by teasing children. Some even threw tomatoes at her house. Another one wrote LEAVE on Red, since Samar’s house is next to the tree.  So when Samar hangs a rag on Red, making a wish that she finally gets a friend, Red really wants to grant this wish and it would be his first time.

The other conflict is that a lady threatens to cut Red down because she said he has just been an interference to the neighborhood, and he is not needed. Red and his friends have to figure out a way to stop the people from cutting Red down.

What I liked about this book is that it is about accepting diversity in a neighborhood. It also showed that having friends can help you a lot. In the book there were several examples of that of that. I also liked it because it was narrated by a tree, and that’s unusual.

I really liked this book. It gets 3/4 roses!