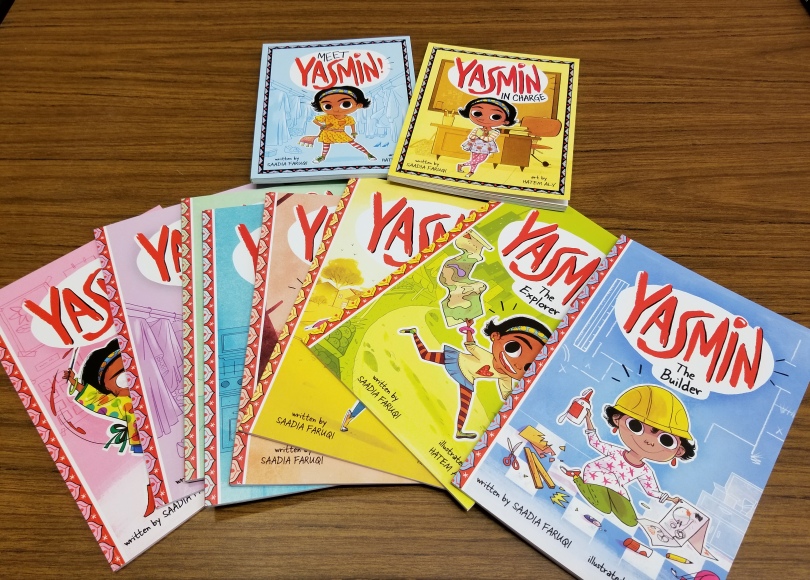 Yasmin is an adventurous girl who wants to be everything. From a fashionista to an architect, she is up for anything, anytime.

She is the main character in a series by Saadia Faruqi. In all the stories, Yasmin shows that you can be anything you want, if you’re up to the challenge.

There are eight books in all. But they are also split up into two books. Half of them are in Meet Yasmin and the other half is in Yasmin In Charge. I haven’t read the ones from Yasmin in Charge, but my favorite from the Meet Yasmin would probably be Yasmin the Painter.

Yasmin loves trying new things, which is why she has a long list of occupations she might try when she is older. Even when things get challenging, she still is persistent to reach her goal. For example, when Yasmin wanted to be a painter, she accidentally messed up her painting. But she learned that you can make a miracle out of something upsetting!

I liked that the books showed a Muslim family who lives in Pakistan and also pushed back misconceptions with a few simple pictures. One way illustrator Hatem Aly did this is when Yasmin’s mom put on her hijab when they were about to go on a trip to the market. That showed that women don’t wear hijabs all the time. It is usually just in public. (Author Saadia Faruqi wore one to the book talk I met her at. Look for my interview with her on the blog later this week.)

This series would be best for readers ages 4 to 8. Younger readers will love the adventures with Yasmin and may start thinking about their future the way she does. If you like easy -to-read “chapter” books, you will like the Yasmin books. You will also learn  a lot because of the activities, recipes and discussion pages at the end of the books.

I enjoyed the series. It gets 3 out of 4 roses!