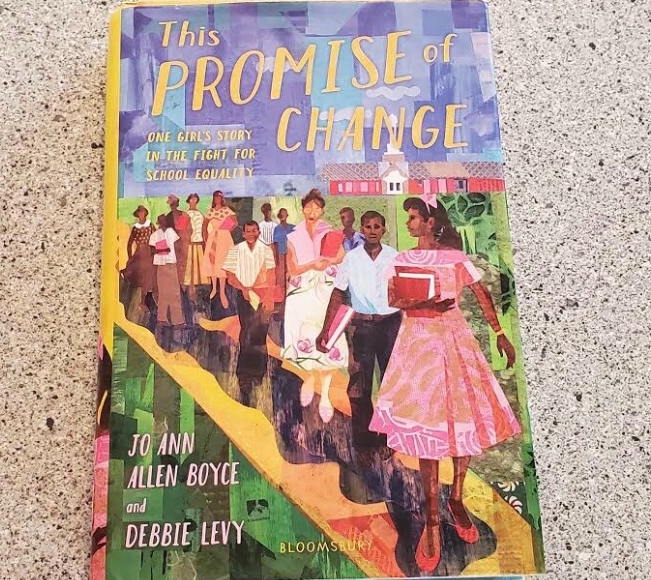 Before the Little Rock Nine set foot into an all-white school, there was the Clinton 12: a group of Black students who enrolled in all-white Clinton High School in Tennessee, during 1956, a year where racial divide was prevalent.

Their goal was to integrate the school and encourage others to do the same. Of course, it wasn’t easy. Many wanted to keep Black and white people separate. Even if it meant rioting, screaming out violent and hateful messages, and attacking innocent Black teens. Jo Ann Allen Boyce, one of the members of the Clinton 12, tells her shocking side of the story through freestyle poetry in This Promise Of Change: One Girl’s Story in the Fight for School Equality.

This book shows bravery, strength, justice, and optimism. Readers can learn a lot from this book, as they read about someone fighting for their right to go to school – something they may not even appreciate. Plus, it sends a message of hope to readers, telling them even if things aren’t looking good now, they will get better.

Debbie Levy is a coauthor of this in verse novel. I’ve reviewed We Shall Overcome, which was also written by her.

I loved this book because it really described characters, scenery, and emotions so well. Of course because this is a true story, it was probably easier for the author to recall memories and write down what it felt/looked like, but I was still blown away. This book also reminded me of Ruby Bridges’ life. She was a first-grader who also helped to desegregate a school – expect she was much younger and did it by herself, and not with a group. (I got to meet her!)

This book has a lot of scenes that may be to violent for some readers. There is physical bullying, the KKK set off a bomb, and there are many mobs of protestors who don’t agree with integrating the school. I read this book when I was 11 and understood most of it, but I think it depends on the kid and how much they can handle when reading a book. If you are interested in reading books about desegregation, you should also check out a guest review of The Lions Of Little Rock on my blog.

I really loved this book! Four out of four roses!