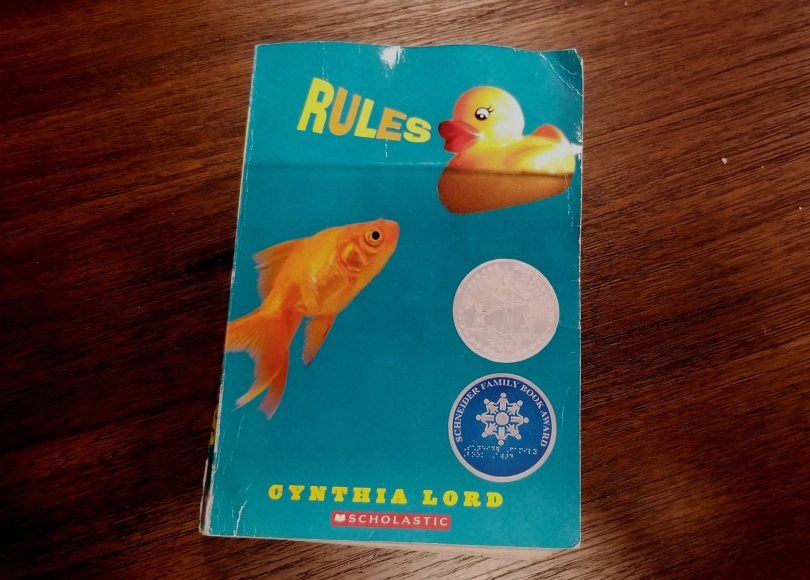 My school spent an entire month raising awareness about autism for Autism Awareness Month. Every Friday in April we wore blue and then we had an autism walk to show support for students in our building who have autism.

I learned that autism is a thing you are born with, it is not something you can catch. It is simply just something that is different from other people. Sometimes you can’t tell someone is autistic just by looking at them, but you can tell by the way they are acting. For instance, autistic kids cannot communicate that well and they do things we wouldn’t even think of, like expecting everyone to be somewhere at the exact time they said they would and right on the dot! Some people with autism notice little details we don’t even care about someone.

That made me remember about an award-winning book called Rules by Cynthia Lord.

My friend Nadia and an adult who follows my blog suggested I read this book. So I did and I really liked it.

Rules is told from a girl named Catherine’s point of view. Her brother David has autism and Catherine makes all of these rules for him so he is less embarrassing in public and less annoying at home.  She also makes rules to help David, like the one that says “keep your pants on in public” or the rule that “a conversation takes two people.”

In the book, Catherine’s brother hears things louder than people without autism, so he covers his ears when he hears a truck coming or something like that. He doesn’t know the difference between people laughing because they like him, or if they’re laughing because they are making fun of him. He expects people to show up for things exactly when they say they will. Some of what David does bothers Catherine because he gets all their parent’s attention and she wishes he was a normal brother.

One day at David’s occupational therapy session, Catherine sees a person who uses a wheelchair and cannot talk. His name is Jason. He and Catherine become friends, communicating to each other by a communication book that Jason uses to talk to people. But when she tells her friend about Jason, Catherine leaves out details about Jason’s differences. I think maybe because she is embarrassed.

In the end, Jason helps change the way Catherine looks at people who are different. She also has a better relationship with her brother because she learns to cope with David just the way he is.

I liked that the book was about a boy with autism; I’ve never read a book on that subject. I also liked that it was about friendship. Catherine had to learn about accepting people the way they are and that there is no perfect answer on what normal is.

I think the author was really creative on this book. She has agreed to do an interview with me this summer, so make sure to check my blog every once in a while so you don’t miss it.