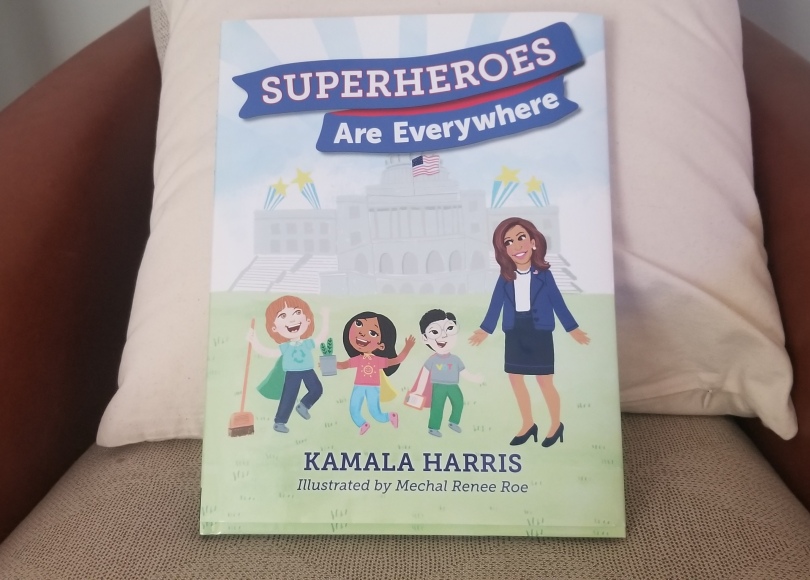 One of the first songs I learned at church was “Jesus is My Superhero” and that’s why I love the idea of this book, Superheroes Are Everywhere, by Kamala Harris.

In this book, kids will learn that superheroes aren’t just ones on TV or in comic books, they are everywhere, and they can find the superhero in themselves. For me, it’s – people in my family (my mom, dad, and brother), teachers (Mrs. Smith and Mrs. Dalton) and activists from the past (Dr. Martin Luther King Jr. and John Lewis) and many more.

This book starts off with the author, who is a U.S. Senator and also the first black and Asian female Democratic nominee for vice president, thinking about how when she was younger, she knew that superheroes were everywhere and so one day she went on a superhero search. Kamala Harris soon found that her grandparents were superheroes, and so were her best friends, and as she got older, lawyers she looked up to fell into the superhero category.

Each page of this book has a banner stating what traits come with a superhero. “Heroes protect people” one states, or “Heroes work hard.” Superheroes don’t have to have powers or have a cool nickname. Heroes can be anyone, and I think Kamala Harris was trying to show kids they could be a superhero, even without super-strength or double speed.

I liked the illustrations by Mechal Renee Roe! They were so cute and I think they were perfect for the book. I also loved how diverse the illustrations were of children who were black, Asian, white, Indian and also kids who use wheelchairs. Kids could probably see themselves in at least one of the characters, and know they are all superheroes.

I recommend this book to kids who like superheroes. They will be beyond excited to see they, too, can be superheroes.

I rate this book four out of four roses! I think it’s a good book for kids and adults alike!