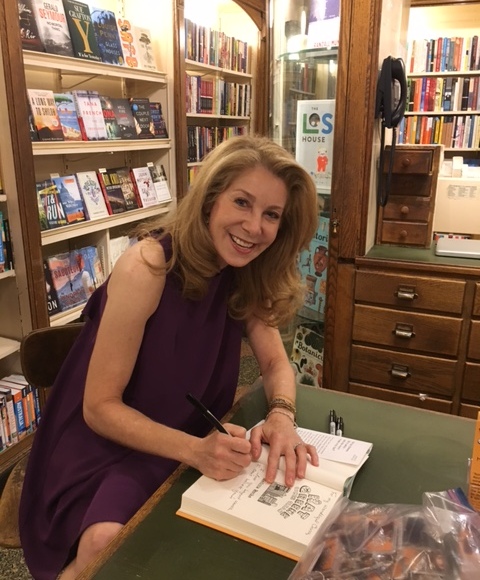 Melissa Roske’s short story, Grandma Merle’s Last Wish is featured in Coming Of Age:13 B’Nai Mitzvah Stories. The book is available in April. Her entry is a really enjoyable tale about a girl whose grandmother is trying to convince her to become a bat mitzvah. The story is just one of the things Roske has done since her astounding debut novel, Kat Green Comes Clean. I interviewed her a few years ago, and I’m excited to catch up with Roske again to talk about her latest project.

Question: What have you been doing since you wrote Kat Greene Comes Clean?

Answer: Since my debut novel was published by Charlesbridge in 2017, I’ve written two additional middle-grade novels: one about a girl who starts an all-girls football team at her all-girls school; the other about a family on a reality TV show. I’m currently revising the football book as my agent gears up to pitch the reality-TV book to editors. The submission process is long and windy, with plenty ups and downs, but I’m ready for it.

Q: What inspired you to write your entry in Coming of Age?

A: “Grandma Merle’s Last Wish” is about a girl from a nonreligious Jewish family whose grandmother desperately wants her to have a Bat Mitzvah. The story is purely fictional, because my real-life grandmother, Molly, and I were extremely close, and she didn’t pressure me into anything—including a Bat Mitzvah. My parents, on the other hand, had loads of expectations for me, which I dutifully fulfilled. That’s the inspiration behind the story, I suppose: the heavy weight of familial expectations… and the courage to deal with it.

Q: In your short story, “Grandma Merle’s Last Wish,” what character do you mostly identify with?

A: Bella, the protagonist. As above, Bella must decide whether she wants to fulfill her grandmother’s “last wish” by having a Bat Mitzvah. Bella is more of an independent thinker than I was at her age—and braver, which makes me admire her. Plus, identifying with someone brave makes me feel brave, which in turn might encourage readers to feel brave. So, yeah… Bella is my girl.

Q: What was your Torah portion when you were called to the Torah?

A: Best question ever, Elena! I read from the Book of Leviticus, which details how and when religious offerings must be made to God. I don’t remember the specifics of my Torah portion—my Bat Mitzvah was, like, a zillion years ago, remember—but I do recall something about animal sacrifice. It was as appealing as it sounds!

Q: I saw you tweet #antisemitism after the hostage situation at the synagogue in Texas didn’t make front page news in the New York Times. What can a young person do to fight antisemitism?

A: Another great question. I think the most important thing is to keep a vigilant eye out for injustice, whenever you see it—and then say something. That’s what I was doing, in my small way, by calling out the Times’ less-than-attentive treatment of the synagogue hostage situation in Texas. Sure, the Times doesn’t care what I think. But if enough people speak out against antisemitism—and other forms of injustice, whether it’s religious, ethnic, political, sexual, color- or gender-based, etc.—it might finally make people wake up and take action.

Q: You are a blogger for an MG website, From the Mixed-Up Files of Middle-Grade Authors. Why do you enjoy blogging?

A: Obviously, I love to write but I’m equally happy interviewing other authors about why they love to write—and what they think and feel. I think my training as a journalist contributes to this. I had the opportunity to interview dozens of interesting people, including actors, rock stars, rappers, and politicians, and I always relished their stories. As a blogger, I get to hear stories from many authors I admire—and then share them with the kidlit community.

Q: I see you like Wordle! My dad does too. Why do you like it so much?

A: Busted! I’m a word-game freak, so Wordle was the natural progression of my wordy obsession. The good thing about Wordle is that it’s not a time-suck—just five minutes per day, at most. I also love crossword puzzles, which I do every day in pen, with Wite-Out correction tape by my side!