Author Rachel Ruiz is a former video person for President Barack Obama. She also worked for Oprah Winfrey and HGTV.

When she was younger, Rachel Ruiz wrote and illustrated her own books. She got inspired to write When Penny Met POTUS by her daughter. And now her daughter is writing and illustrating her own books. I reviewed When Penny Met POTUS earlier this week. I liked it a lot and hope to read other books Rachel Ruiz has written: When Rosa Parks Went Fishing and When Hillary Rodham Clinton Played Ice Hockey.

Question: What inspired you to write When Penny Met POTUS?

Answer: In 2012, I was offered a job working for Barack Obama’s re-election campaign, producing videos for the campaign. It was an amazing experience but I think the best part was that it inspired me to write my first children’s picture book, When Penny Met POTUS. My daughter, who was 3 years old at the time, loved asking me questions about “POTUS.” Did you see POTUS today? What did POTUS have for lunch today? Is POTUS allergic to peanut butter? Does POTUS like red socks? My husband, daughter and I even got to meet President Obama at a campaign rally. But it was really her curiosity that sparked the idea for the book.

Q: What message do you want kids to get out of the book?

A: The message I want kids to get out of When Penny Met POTUS is that you can be anything you want to be. It doesn’t matter if you are a girl or a boy, what color or race you are. There are no limits. So work hard, dream big, and go for it.

Q: Why do you think diversity is important in children’s literature?

A: I think diversity in children’s books is important for two reasons. First, I think it’s important for all children to see themselves in the books they are reading. They should be able to relate to the main characters and their experiences. Second, I think it’s important for white children to see kids that are different from them, and learn about their experiences, customs, and religions. The best way for us all to get along on this great big planet is to understand each other and realize that we are more alike than we are different.

Q: Are there a couple of books you would recommend for kids like me?

A: Do you like graphic novels? My daughter (who is 8) loves reading graphic novels right now. I think she’s read 15 in the last few months! A few of her favorites are Ghosts by Raina Telgemeier, Roller Girl by Victoria Jamieson, and Awkward by Svetlana Chmakova.

Q: Did you always want to be an author? How did you reach your goal?

A: I have always wanted to be a book author. When I was a little girl, I used to write and illustrate stories. I studied journalism in college and became a TV writer and producer. But I never gave up on my dream of becoming a book author. I kept writing and submitting my book idea until finally it got published.

Q: What was it like working for President Obama?

A: Working for President Obama was awesome. I got to travel around and meet people who supported him because he was making changes that made their lives better. And then I got to produce videos about them to help tell their stories. He came to visit campaign headquarters in Chicago a few times and it was fun to meet him. The best meeting of course is when my daughter got to meet him.

Q: Does the White House really look like it does in the pictures in your book?

A: I’ll let you in on a little secret – when I wrote When Penny Met POTUS, I had not been to the White House yet. Not even on a tour! I sent Melissa Manwill, the book’s illustrator, pictures of the White House that I found online. In 2016, my daughter and I were invited to the White House for a big party that was pretty amazing. 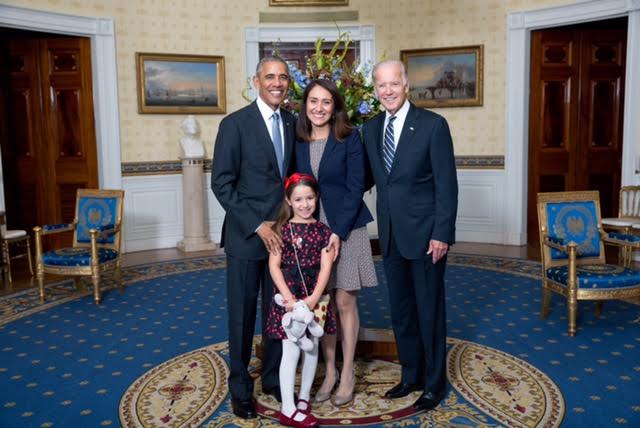