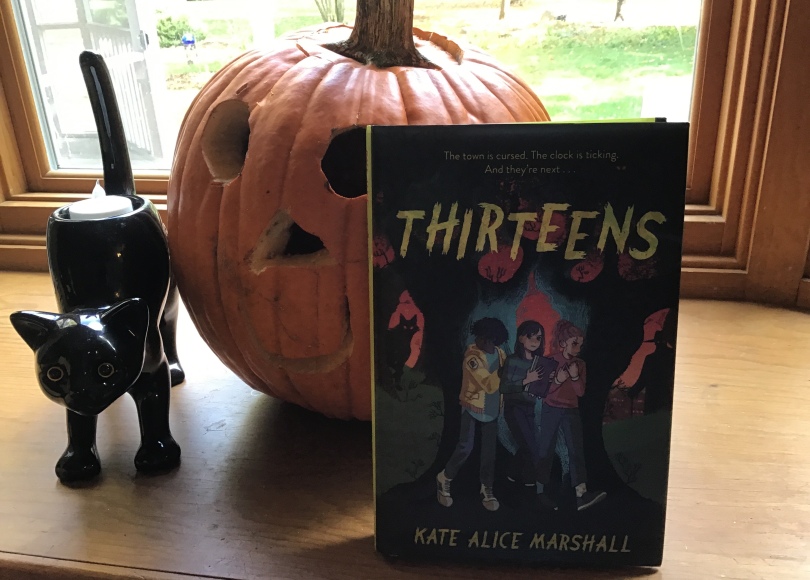 I’m more of a realistic fiction bookworm, but sometimes fantastical mysteries like these win me over. I finished this spooky pageturner, Thirteens, the first day I got it! It’s really creative and perfect for Halloween!

Every 13 years on Halloween, three 13-year-olds disappear. And the town of Eden Eld either makes up how they died or forget about their existence. Eleanor, whose 13th birthday is coming up, doesn’t know about this urban legend, but after seeing so many “wrong things,” she can tell that something is up. She sees a clock that was never there that runs backwards, and a creepy dog and bird that seem to follow her. And that’s when she meets Pip and Otto, who can also see these things, even though others can’t. Soon, the three are trying to solve a mystery with a society on their tails, an odd book of fairy tales, a man named Mr. January, and the mysterious numbers 31313.

I LOVED THIS BOOK!!! It was scary, but I just loved the way everything was connected – nothing in the book was a coincidence. Everything flowed so well together, but at the same time, it was impossible to predict what was going to happen. The author, Kate Alice Marshall, is great at describing everything – from emotions, to people, to settings. In some mysteries I read, the author mostly focuses on the plot. But in this book, Marshall also did a great job developing the characters and giving them their own personalities. It’s really hard to chose a favorite, but I really loved Pip! She was quirky, gutsy and was a great BBF (Book Best Friend) to me.

One of my least favorite characters is probably Mr. January. He was just really unsettling, and I envisioned him with that eerie presence that freaks me out. He also has backwards footprints, because he is one of the People That Look Away. (You’ll have to read the book to find out more about that!)

Another thing I loved was that the ending was vague and unfinished. The trio doesn’t completely “solve” the mystery, but in a way, they did. I really hope there is a sequel, because I have WAY TOO MANY ideas about what is going to happen next. Especially because Eleanor, (whose dad left when she was young, and whose mom disappeared after allegedly trying to burn the house down) hasn’t found her parents yet, although there are clues in the book that they are still alive.

I recommend this book to anyone who wants a mix of horror and mystery. Pick this up if you like the series Maximum Ride, Harry Potter, or Percy Jackson

How many times do I have to say I love this book! 😂😂 It gets four out of four roses, automatically.